Collections of unique materials pertaining to a particular group of people are preserved in archives. This definition from the Society of American Archivists captures their variety and the many uses they might have.

"Archives are the non-current records of individuals, groups, institutions, and governments that contain information of enduring value. Formats represented in the modern archival repository include photographs, films, video and sound recordings, computer tapes, and video and optical disks, as well as the more traditional unpublished letters, diaries, and other manuscripts. Archival records are the products of everyday activity. Researchers use them both for their administrative value and for purposes other than those for which they were created. For example, Native Americans may use archival records to establish legal claims to land and privileges guaranteed by federal and state governments; medical researchers utilize records to study patterns of diseases; authors use archives to acquire a feel for the people and times about which they are writing; historians and genealogists rely on archival sources to analyze past events to reconstruct family histories; and businesses use the records to improve their public relations and to promote new products. In short, archives benefit nearly everyone, even those who have never directly used them."

where government documents come from

It’s pretty obvious: they come from various official sources – local, state, federal, foreign, and international government bodies. But sometimes getting your hands on them is less obvious.

Governments are prodigious publishers of information, and in the US many government publications are available to the public and are in the public domain, meaning not copyrighted. When they aren’t readily available, citizens may file Freedom of Information requests. To make it easier to make such requests, journalism organizations have a FOI request generator for both state and federal agencies. Of course, some documents are unavailable because they are classified or sensitive. The numbers of documents that are unavailable is, naturally, controversial.

The Reporter’s Committee for Freedom of the Press offers an Open Government Guide and has been following issues related to open government as government services are outsourced to private corporations. The Federation of American Scientists also has a site devoted to their Project on Government Secrecy. (They’re against it.)

One treasure trove of documents obtained under FOIA is the National Security Archive at George Washington University. The FBI also makes its most frequently-requested FOIA documents available on their website, everything from files on the Aryan Brotherhood to information on interrogations at Guantanamo Bay. 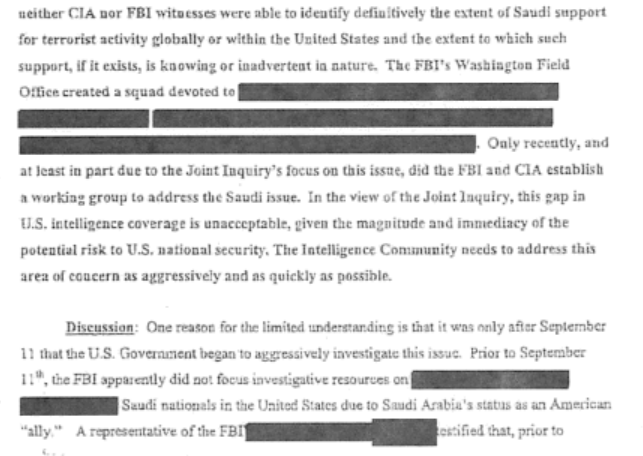 excerpt from a report on Saudi involvement in the 9/11 attacks released in 2016 with redacted passages.

Catalog of Government Publications – for documents from all federal agencies published since 1976; note, the most recent documents may not yet have been entered. For very “hot off the press” information, search Google with the limiter site:.gov. For years before 1976, consult the printed Monthly Catalog (and ask a librarian to help – these indexes are tricky to use).

Congressional Universe – a database the library subscribes to, covering hearings, bills, and other material from the US Congress.

Reports from the Congressional Research Service are written by Library of Congress staff in response to Congressional requests for information and analysis. Frustratingly enough, these are not made available by the Service, but luckily are collected by various groups.

Reports from the Government Accountability Office are even-handed and useful.

For laws and court opinions, see our guide to resources on the law.

where statistics come from

When statistics were first invented, they were called "political arithmetic." People wanted to count things for political reasons. They described nation-states. Today, governments remain a major source of numerical information.

Governments are compulsive bean counters. In addition to the Census Bureau, there are a number of agencies within agencies that are charged with generating statistics: the Bureau of Justice Statistics, the Center for Educational Statistics, etc. They can become highly politicized. Whenever the Census counts population, the race categories are debated and often changed. Currently A large percentage of Trump supporters said they simply do not trust employment data from the Bureau of Labor Statistics. (This is unusual.)

Organizations can be excellent sources of statistical information, though advocacy groups are likely to present numbers that support their cause. Polling organizations design opinion polls that are reported and sometimes published. Some statistics can only be found in secondary sources such as in-depth news analysis of issues or scholarly articles that present data or draw together numbers from various sources and integrate them for analysis. If you’re not familiar with statistics terminology, this guide from Journalist’s Resource might help

Numbers may look like pure facts and are often presented as irrefutable proof, but they are shaped by the methods used to gather them. Whenever you use statistics, pay critical attention to who gathered them, how, when, and for what purpose.

Often you might want to find demographic or social statistics as evidence for some claim you are trying to make – or to evaluate claims made in a source you are reacting to. The US federal government provides a huge number of numbers on many topics. Organizations and trade associations often track trends as well. (Use the Encyclopedia of Associations – shelved behind the reference desk – to find out which organizations exist by topic.) And several organizations conduct and publish opinion polls.

what’s your opinion?
Gallup Polls annual summaries are in the reference collection (Ref HN 90 .G29). Another source for raw opinion poll data is the Harris Vault, particularly useful for comparing public opinion on issues over time.

For a more global approach to opinion polling, check out the Pew Global Attitudes Project or the World Public Opinion polling site.

we’re from the government …
For decades the Statistical Abstract of the United States was a one-stop shop for numbers. It can be used historically for basic figures and for figuring out who counted what. Summary tables included source information where you could find more. Unfortunately, the government stopped publishing this handy compendium to save money.

… and boy, do we have stats

The US Census is a vast trove of statistical information not just on people but on business and economic information. But it’s far from being the only source of statistics.

The General Social Survey, conducted since 1972, gives researchers data about people's concerns, attitudes, and experiences by sex, age, race, and other variables. You can either download entire datasets and codebooks or take a quick look at the data using the University of Chicago's GSS Data Explorer. Though this data is collected by researchers, the project is funded by the National Science Foundation.

Also of interest to sociologists, policy wonks, and economists: the Panel Study of Income Dynamics which since 1968 has tracked a sample of individuals in (originally) 5,000 households, tracing their socioeconomic status across generations.

Increasingly, data sets are being shared online and these pools of data can help researchers answer questions the original data gatherers never thought of. The National Science Foundation now requires those who get grants to have data plans for open data sets; many companies gather and use data of all kinds, some of which is released free online.

If you are having trouble finding the numbers you need, try searching for books or articles that may include analyses of the issues. Sometimes someone else has gathered and analyzed the data but it’s only available in published form.

And finally, consider whether there is a reason the numbers you’re looking for aren’t available – is there a powerful lobby group or a political or social taboo that makes it hard to gather accurate figures? Are there disputed figures gathered by people with different agendas?

Maps, which spatially represent relationships, have been around for a long time. They have been important in exploration, trade, and military conquest. Maps can represent terrain, political relationships, roads, historical change, demographics, etc. Recently, computer programs enable combining data sets with geospatial information. This means that by linking data to a specific location, you can look at data as it relates to places. You can also create maps with layers to show elements such as race and ethnicity, income, or religious affiliation. You can also use satellite imagery to map changes over time, such as the advance of deserts or the growth of cities. Data and satellite information gathered by the government can be used to create maps.

These Web-based programs can be used to create maps on the Web – though some of them involve a serious learning curve.

find places and get distances and directions

Google Maps – for road maps, satellite images, real-time traffic data, and street views; you can also create your own maps using their tools or some computer code wizardry. As an example, see LibraryThing’s comparison of the distribution of libraries and bookstores in cities or History Pin, a site where people are invited to upload historical photos of places. If the place currently shows up on Google Street View, the website will allow you to view past and present in layers.

collections of maps from various sources

"Big Data" is the capacity to gather and analyze data at a speed and on a scale never before possible. It's characteristics are

Cathy O'Neil criticizes many of the ways Big Data is deployed in society because they lack transparency (being often proprietary and for-profit systems), they can't learn so perpetuate mistakes, and embed in them the biases of their creators while claiming to be objective and fair. She argues it has great potential to do good, but not if its systems can't be audited.