“Love for humanity is the strongest of all forces for good” 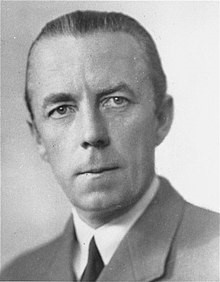 Count Folke Bernadotte was a Swedish diplomat born in Stockholm on January 2, 1895.   He came from a powerful Swedish family—his grandfather was King Oscar II, his uncle was King Gustav V, and he was a descendent of Jean Bernadotte.  On December 1, 1928, Bernadotte married Estelle Romaine Manville—a wealthy American woman he had met in Paris that year.  They had four sons together, two of whom died at early ages.

Folke Bernadotte had a military education from a young age.  After graduating from Karlberg Military School, he began studying horsemanship at Stromsholm military riding school in 1916.  He went on to become a cavalry officer in the Royal Horse Guards.  Count Bernadotte was also fluent in six different languages, making him very useful to the military.  From 1930-31, he studied banking in New York and Paris, but it became clear that he had a passion for humanitarian work.  Up until this point, he had never had an outlet for that passion.

After Bernadotte retired from the Swedish Army in 1933 with the rank of Major, he joined the Swedish Scout Union (which consisted of the Young Men’s Christian Association (YMCA), the Boy Scouts, the Salvation Army, the National Templar Order, and the International Order of Good Templars).  He started as a member of the YMCA before switching to the Sveriges Scoutforbund (Swedish Boy Scouts) in 1934.  He quickly climbed through the ranks of leadership for the Sveriges Scoutforbund, finally succeeding Major Ebbe Lieberath as Chief of the Swedish Boy Scouts Association in November of 1937.  The Boy Scouts gave Count Bernadotte an outlet for his passion for humanitarian work, a setting which he thrived in.

Count Bernadotte’s honors and achievements were many during this time of his life.  In 1933, he represented Sweden at the Chicago Century of Progress Exposition.  He was Swedish Commissioner General at New York’s World’s Fair from 1939-40.  Perhaps Count Bernadotte’s greatest achievement with the Sveriges Scoutforbund was integrating it into Sweden’s defense system—after this change, scouts were trained in anti-aircraft work and as medical assistants.

Bernadotte became Vice-Chairman of the Swedish Red Cross in the spring of 1943, years after beginning his involvement with Sveriges Scoutforbund.  This responsibility took him frequently to London and Berlin for conferences with high officials.  That same year, Bernadotte went on his first humanitarian mission, moving disabled prisoners of war through Gothenburg port in Sweden.  In March of 1945, he led another rescue mission into the Third Reich—they saved some 14,000 Norwegian, Danish, and Polish prisoners.  Many of these were Jewish people headed to the gas chambers.  Heinrich Himmler, head of the Gestapo and Commander in Chief of the German home front, authorized this rescue in an effort to build credit with the Allies for after Hitler’s reign.

On April 24, 1945, Heinrich Himmler met with Count Bernadotte and offered Germany’s surrender to Britain and the United States.  His one requirement was that Germany be allowed to continue resistance against Russia, fighting what he called a “defensive battle.”  The Swedish Foreign Office transmitted this offer to Prime Minister Churchill and President Truman, who notified Premier Stalin.  They advised Bernadotte to accept only an unconditional surrender to all three Allies.

After successfully handling Himmler’s offer, the five great powers of the United Nations Security Council appointed Bernadotte mediator in the Arab-Jewish conflict in Palestine on May 20, 1948.  Their decision was unanimous within seven minutes—the fastest major decision that had ever been made by the United Nations.  Bernadotte began working immediately.   On May 30, he initiated conferences with Arab and Jewish leaders in Palestine, Egypt, and Jordan.  Bernadotte was very respectful and polite during his interactions with both sides of the conflict.  He even brought appropriate clothing for each location—in Cairo, he wore a white tropical suit and in Tel Aviv a grey bemedaled uniform.  On June 11, he obtained an agreement to a four-week truce.  Bernadotte submitted a peace plan to the Arab League and the Israeli government on June 28—both sides rejected this plan.  He made a report to the United Nations Security Council (which was in session in New York) on July 12 and then returned to Palestine to continue working.

On September 17, 1948, members of the extremist Jewish group Lehi (also known as the Stern Group) shot and killed Count Bernadotte (along with Colonel Andre P. Serot of the French Air Force) in Jerusalem.  The Zionist organization had committed multiple atrocities against the British and the Arabs in the recent past.  Strangely, this was not the first attempt on Bernadotte’s life that day.  Earlier that morning, a young Arab had shot at his car as he drove from the airport.

After Bernadotte’s death in 1948, the library at Gustavus Adolphus College was chosen as his memorial site.  Gustavus was founded by Swedish pioneers in 1862 and was named in honor of a Swedish monarch who played a decisive role in the European religious wars of the seventeenth century.  The college was situated among a thick Scandinavian population—so thick, in fact, that 62% of the student body had Swedish parentage and 83% were of Scandinavian descent.

Count Folke Bernadotte led a very long and meaningful life.  He once said, “Love for humanity is the strongest of all forces for good,”—and he clearly lived his life with that idea in mind.  His humanitarian work with both the Sveriges Scoutforbud and the Swedish Red Cross made impressive changes within both organizations, changing them both for the better.  Upon his death, Bernadotte had an extensive list of accomplishments and honors, making him an excellent namesake for the Folke Bernadotte Memorial Library.